This summer, from the 16th of July to the 1st of September, the snowy wall of the Triennale Museum in Milan will hold Velasco Vitali’s exhibition “Red Forest: 416 ghost cities in the world”. The curators Francesco Clerici and Luca Molinari and the art director Alexander Bellman create an exhibition in which the public will have the opportunity to experience unknown sensations: a perfect mix of art and design, geometry and matter, research and spirituality. An exhibition that summarizes the reflections on previous exhibitions which consolidated the collaboration between Gruppo C14 and the Lombard artist. The exhibition takes us into a nearly timeless, almost metaphysical dimension, defined by urban gashes, material solutions and alienating geometries; Vitali’s work is focused on the artistic, anthropological and spiritual research of the city’s changing appearances.

This investigation started nearly four years ago as an accurate survey supported by images, sketches and interventions meandering through the narrow lanes of Versilia, where the exhibition ”Sbarco a Pietrasanta” took place, to land in the artist’s native country with “Sbarco a Milano”, and followed by “Foresta Rossa: Tutta la città è un isola e tutta l’isola è una città” held on the Isola Madre. In addition, together with the great Milan exhibition, the audience can also admire the installations displayed between the Isola Madre and Verbania, prolonged in response to the success achieved in 2012.
After a long period of experimentation during which the artist explored the potential of the filmed, photographed and modelled image, the artist felt the need to return to painting: as a result the exhibition at the Triennale is composed of 30 large canvases realized with different mixed media techniques ranging from oil to varnish. The Northern Light blemished by the iridescence of the South resurfaces in these art works, distant visions, 416 cities of the world: “Unidentifiable cities. Geometries occupying the horizon. Shapes that might at times recall houses, at times greenhouses, sometimes the tent cities or the favelas. The painting tells the story of this ambiguity”.

The distance represents in fact the artist’s favourite point of view, the only one capable of causing disorientation which then leads the viewer to the bleak vision of these ghost places. Abandoned cities in which we could be freely illegal, stray and insolent. As pilgrims heading towards the oracle, we perceive the aura of these places following the calibrated and refined exhibition-itinerary created by Gruppo C14; the use of natural light coming from the high skylights, along with artificial light projectors expertly designed to contrast in a non-obvious way its volubility and variability, contributes to the creation of an environment with a strong metaphysical character.
Looking into the first room we are introduced inside a hieratic space inside which the analytic and didascalic phase of the exhibition is developed: sketches, drawings and projections are distributed on a long table; these documents tell the story of the introspective and sensitive journey of the artist. A visual archive placed on a surface with a total length of about 20 meters, on which we discover the accurate design of the light outlining a precise and distinct path depicting with a strong pace suggestions in the mind of the viewer. 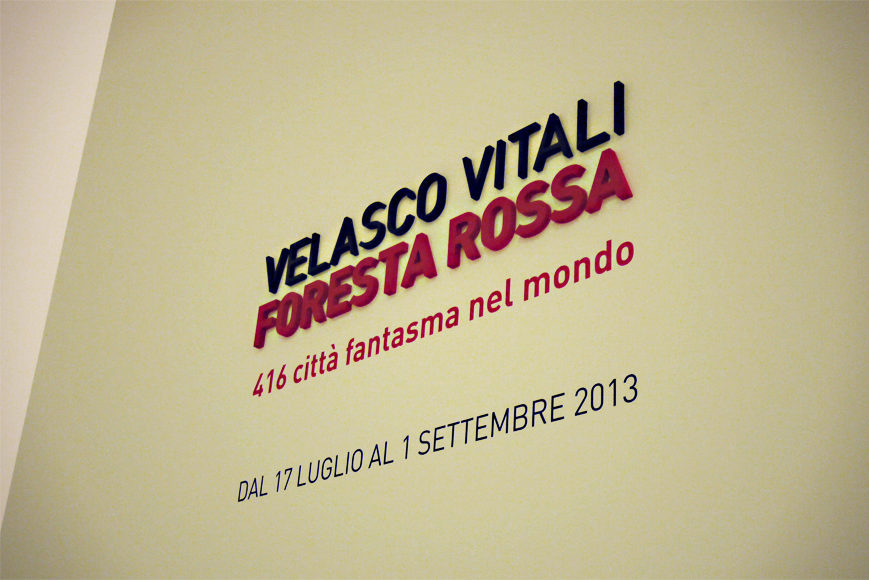 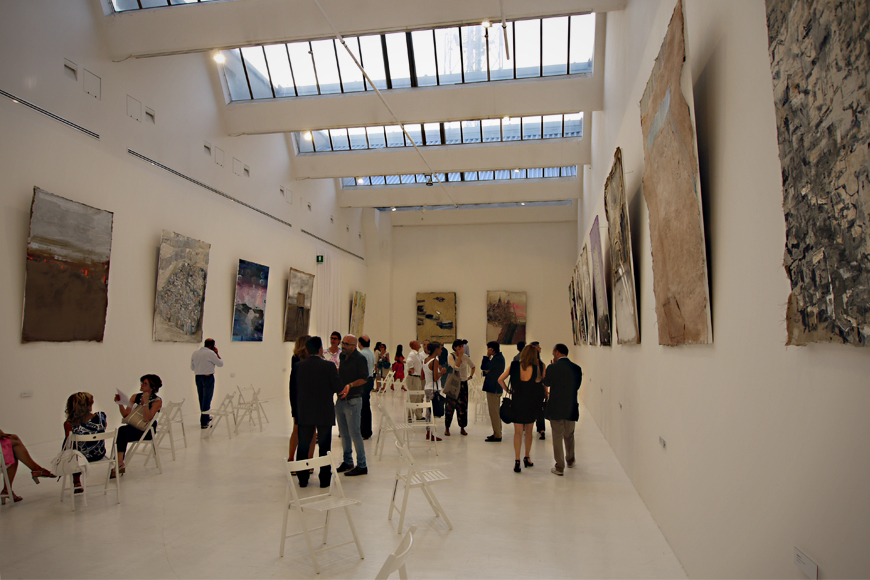 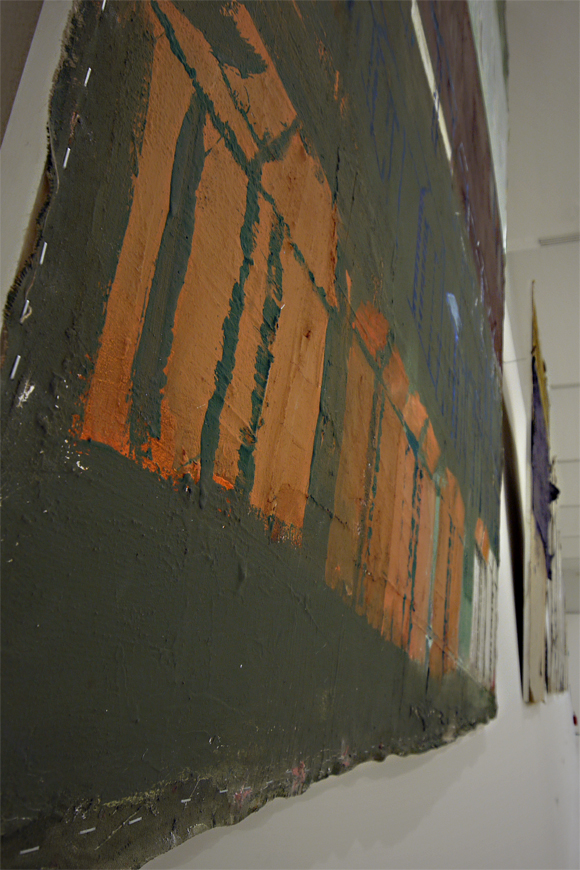 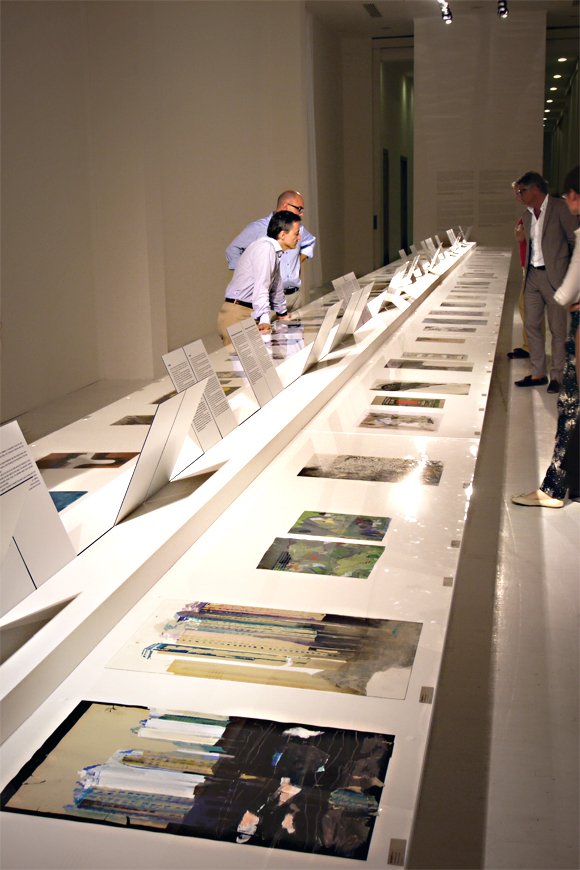 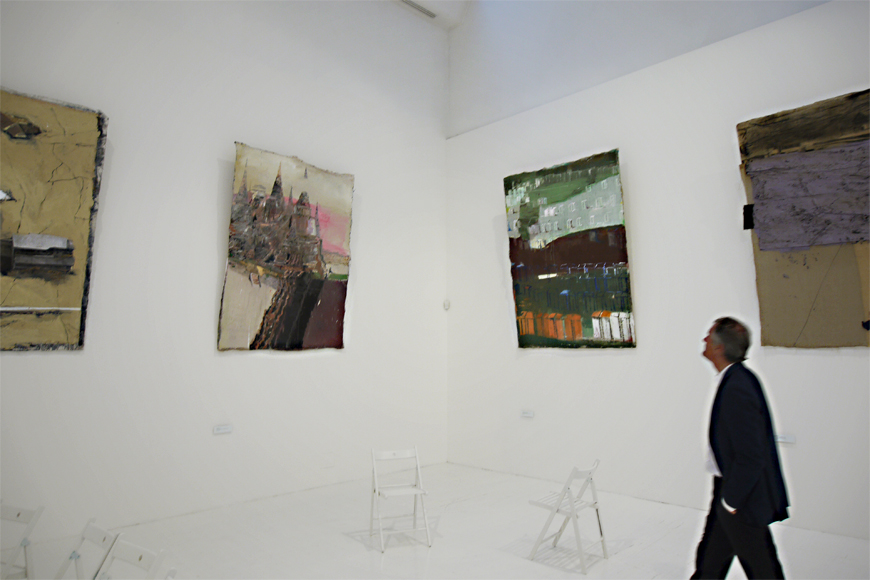